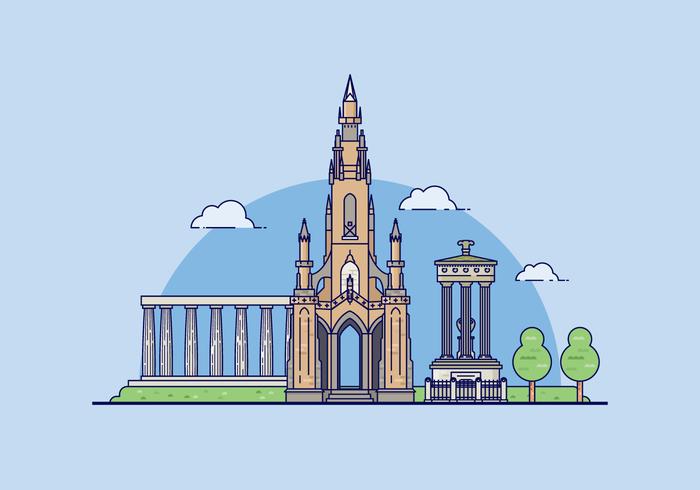 A bit of background about me and the trip…

I am from Taiwan and I am in London to do an accounting internship on Capital Placement’s London programme. Doing an internship in Londonis undoubtedly a great experience but as soon as I received the offer for the programme, I started planning ways to spend my weekends. Set on exploring the UK as much as I can, I promised myself that I will travel to at least one new city every week for as long as I am in the UK. Fulfilling a promise like this requires a lot of planning ahead and this blog is about my third week, where I planned to see Edinburgh over the weekend.

I want to thank Niran, one of the Co-founders of Capital Placement who helped me plan this trip even before I arrived in London! He gave me some great tips about planning and organising this trip. These tips definitely helped when it came to maximising time and finding some good deals, some of which I will share in this blog.

Niran recommended I get a flight from London Stansted Airport to Edinburgh. The airport is pretty easily accessible from Liverpool Street by train, which is where I was interning. I was kind of shocked to find that taking a flight is cheaper than travelling by train! While flight tickets costs £29 for a return trip, train ticket burns your pocket at a whopping £120!

A return ticket on the Stansted Express train cost more than my return flight at £32! Although taking the bus would have been a cheaper option, I did not want to risk getting caught up in the Friday night rush hour and miss my flight, after all I only have 50 hours!

I previously arranged with my supervisor so that I can leave the office at 14:00 so that I can get to the airport just after 15:00,  well in time for the 16:30 Ryanair departure to Edinburgh

Niran recommended I stay at a hostel in Edinburgh as I was travelling by myself. I lodged at a hostel named “Kick Ass Hostel”, as the name suggests it was pretty kick Ass. I booked a 6-bed mixed dorm which I shared with Spanish and French students. They were also travelling for the weekend! It felt great to make some instant friends. Everyone was there with one goal, exploring the city!

After checking in and briefly getting to know my roommates, we decided to grab dinner to a place called “Grain store restaurant”. The dinner was amazing and I loved the dessert! I was fascinated to know that most of the items on the menu are produced locally. The fish I had, comes from the sea just 15min away from where I stayed! I could have kept on eating but I had an entire city to explore and only 46 hours left!

Post our dinner, the easy choice would have been to go back to the hostel and call it a night. That would have been boring! So, one of my new Spanish friends and I decided to go for a stroll around the city. As we explored the city, we lost all concept of time and ended up outside the beautiful Edinburgh Castle. The castle is very hard to miss as it dominates Edinburgh’s skyline! The castle was obviously closed at night to visitors but we had a long chat with the friendly security at the castle and they were kind enough to give us some great recommendations and we managed to put together a mini plan for the next 2 days, before going back to the hostel.

I decided to wake up at 5 am to see the sunrise from Calton Hill, it’s meant to be spectacular! When I got out of the hostel at 6am- it was just me and the city lights. I quickly realised that there will be no coffee shops open at 6am and so I walked back to the hostel to grab some coffee. Once I got my morning caffeine fix, I left for the hill.

I thought I’d be the only one on the hill so early in the morning, but I met 2 photographers who were from Argentina and Iceland, who were photographing their way through Europe. I stayed on the hill until 7am but the sun was shy refused to come out from behind the clouds. Even though we couldn’t see the sunrise,  the view from the hill was still amazing!

I decided to get some breakfast before I continue exploring the rest of the city. Scotland is famous for it smoked salmon so I thought I would give it a go and headed to the Hemma.

After breakfast, I headed to Holyrood Park, which was a short walk from the cafe. The park has many places of interest including the royal palace of Holyroodhouse and the highest point in Edinburgh, Arthur’s Seat.

Unfortunately, I didn’t have enough time to climb the peak as I had to prioritise my time. I have been told the views from the peak is spectacular, here is a video from Robby T  showing what I missed out on-

On my way back from Holyrood Park, I came across this little statue. I asked around and there is a cute story behind this Skye Terrier. I’ll leave it to you to find the details of the story when you visit Edinburgh 😉

No trip to Scotland is complete without a whiskey tour. Although I’m not a huge whisky fan like they say, when in Rome…

I decided to splash out and spent £35 for the incredibly touristy Platinum experience at the Whiskey Tasting Experience. It was very informative and we got a taste quite a few different Scotches and they even gave us a little souvenir to take away!

After the scotch tasting session, I was tipsy hungry so I decided to get some food from Chop House in Leith. I can’t recommend this place enough, I ordered their Steak!

The next morning I was hungover raring to explore the rest of the city but as usual, I wanted to get my caffeine fix and as I was walking I came across this great cafe-

I thought I’d help leo at Leo’s Beanery! Their coffee is pretty amazing, so I don’t think “the owner” is at the risk starving anytime soon 😉

I got chatting to some tourists in the cafe and they said they are on their way to the Stockbridge Market and they recommended I check it out. I decided to take up their recommendation and I am very glad I did as the market is only open on Sundays and they not only have great food, they also have all sorts of stalls including soap and toiletries!

I decided to treat the market like a buffet and hopped around a few stall to try a bit of everything.

After stuffing myself, yet again, at Stockbridge Market, I had to head back to the hostel to pick up my bags before I head to the airport.

At the hostel, I bumped into my roommates and they said they said they went to an amazing Tea room called Casa Angelina at London Street. I told them I am not a huge fan of tea

Two days in Edinburgh, and I feel like I’ve just scratched the surface! There are so many things to do and see, you can run out of time but not options! From nightlife to stroll around the musical streets, adventure and much more! In two days, I managed to get a glimpse of everything. With good view and great food, Edinburg is a traveller’s paradise!

Next week, I am planning to explore Exmoor and go mountain biking with Niran! It should be fun. Stay tuned for my next blog post! Until then-Adios

The Importance of an Internship: Top 5 Reasons Why Internships Are Critical

Just having a good degree is no longer enough to secure that all-important graduate job offer in today's world. Pertinent work experience is now just as valuable as your degree and exam results when it comes to building a successful career. As a result, internships...

END_OF_DOCUMENT_TOKEN_TO_BE_REPLACED

Grow Your Professional Development: 5 Tips to Help Your Career During the Quarantine Period

Large parts of the world have come to a halt since the pandemic. As a result, many students and graduates are unsure what their next step may be as they’ve had summer plans or internships cancelled. Consequently, it has raised the question of how you should use their...

END_OF_DOCUMENT_TOKEN_TO_BE_REPLACED

At the beginning of this year, students were getting ready to enter what was predicted to be the strongest job market in over ten years. Unemployment was at record low levels, stock markets had reached new peaks, and the job market was looking promising with many...